EKBY's Library is located on the 1st floor of the building and includes a reading room.

The Library contains 5,000 volumes. Enrichment with new content is a continuous procedure. The content is categorised as follows:

The Library has a large collection of research material. The public can borrow books, research studies and CD-ROMs for maximum allowed time period 3 days, and with maximum number of items 4. A prerequisite is to leave an identity card. Borrowing is only possible during Library's opening hours. 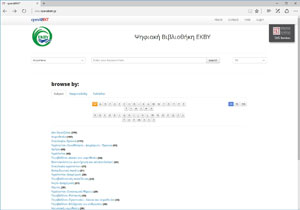 The Digital Library of EKBY is available since January 2017 from the link: http://ekby.openabekt.gr/

It is a web application that enables open online presentation of the Catalogue of EKBY’s Library and provides navigation capabilities, flexible search of metadata fields and advanced search filters.

Connection and direct access to the actual digital files (content of the Digital Repository of EKBY) is available only for EKBY's publications, indicating their license of use and disposal in the form of open data, according to rights that have been given.

It is noted that the Digital Library of EKBY does not support interlibrary loan service.

The Digital Library was developed with the web platform for management and open disposal of library catalogues and functions, namely “openABEKT”. OpenABEKT has been made available to EKBY as a Software as a Service (SaaS) via the cloud infrastructure of the National Documentation Centre (EKT), in the frame of a memorandum of cooperation between EKBY and EKT. OpenABEKT ensures interoperability with national and international platforms for content accumulation and diffusion and it is searchable by indexes and open content search engines such as Google. It in an evolution of ABEKT, the integrated library system that was developed by EKT since 1987 and which the Library of EKBY was using until recently.

The disposal of openABEKT service to EKBY and the data migration from ABEKT system to the new, were done in the framework of Projects: a) "Development of Web Portal for the diffuse of information for Nature and Biodiversity of Greece", implemented by EKBY and b ) "Platform for the provision of services for the Deposit, Management and Distribution of Open Data and Digital Content", implemented by the National Documentation Centre, which are included in the Operational program "Digital Convergence" (NSRF 2007-2013) and co-financed by Greece and the European Union - European Regional development.